Shaken, not stired. What’s the connection between Aodann and Bond’s No Time To Die

Ready for the new Bond movie? No Time to Die is due out (finally) in November 2020 and there is a connection to Aodann – well almost!

Last year we got an email from a location agent looking for somewhere to shoot a scene for a movie. His signature had the address B52 which we assumed was the room number! We thought it was probably a hoax but called him up anyway. And it wasn’t a hoax. It was the location agent for No Time to Die (code name B52).

Well, to say we were excited doesn’t cover it. They sent a scout to have a look around – they wanted a modern house in a natural landscape – there was talk of taking the fence down (we were prepared to agree to anything!). In the end they selected another property further up the west coast – we don’t know if that will have made the cut or not, but looking at the new trailer there looks like what could be a Highland scene…..

We were obviously gutted. How brilliant would it have been to have Aodann in a Bond movie!  There was one small compensation though – when the first trailer came out our home in south east London was in it! So we sort of made it into the movie after all! 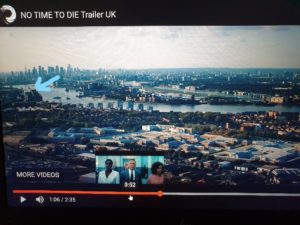 Aodann didn’t make the cut but our south east London home ended up in the first trailer for Bond movie No Time To Die!

Get in touch
Home Blog Shaken, not stired. What’s the connection between Aodann and Bond’s No Time To Die